A report from Natalie May, Branch Equality Officer.

Last week, a group of 14 people made up of University of Bath staff, students and Bath Welcomes Refugees members visited Calais to volunteer at Refugee Community Kitchen and Mobile Refugee Support. A very successful charity collection at the University and locally in Bath enabled us to take a large van and several cars full to the brim of warm winter clothes, sleeping bags, blankets and food. 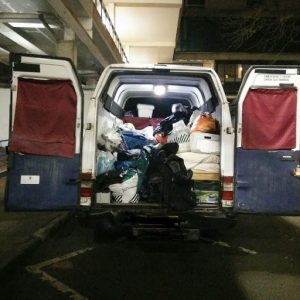 The van was full to the rafters when we left!

Setting off at an utterly ridiculous hour in the morning the van trip was relatively easy and four of us managed to squeeze in with the donations to arrive in Calais early Friday morning. We headed straight to the warehouse locale of L’Auberge Des Migrants , a humanitarian non-governmental organisation set up in 2008 in response to the refugee crisis in Calais. Set in two vast warehouses the space houses many partner organisations, each working collaboratively to provide (among other things) warm food, clothes and blankets, information, youth support and human rights education in Calais and nearby Grande Synthe. Incredibly, the organisations are largely run by volunteers who give up anything from a weekend, to months, to years to be part of an amazing network of energy and proactive support for the homeless refugees in the area.

A large portion of the team was already at the warehouse having travelled on Wednesday and we changed into our chef’s blacks to join them in the Refugee Community Kitchen. And what a kitchen. Run entirely by volunteers the warehouse kitchen creates and provides up to 2,500 meals a day and food supplies are donated or purchased using donated funds. The premise is simple: “Feeding people without judgement”, and hearty soups and lentil stews served with pasta or rice and a salad are distributed locally twice a day. 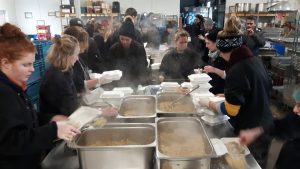 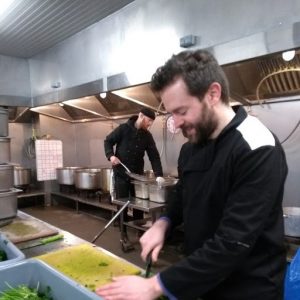 The steaming, busy kitchen with loud music and sporadic dancing is a space where volunteers who have never been in a professional kitchen pitch in and find a job wherever is needed, no matter how big or small. Led by a kitchen leader you move round fast and find a space where you are needed most in a moment: chopping and peeling thousands of onions; industrial washing up; stirring vats of beans or rice; washing floors; washing, washing, washing surfaces and equipment; conveyor belt style bento box preparation… each and every job had a purpose and a goal: to feed those who were without food – and volunteers worked from 9am to 6pm every day to this end.

Tensions were high in Calais and the situation was grim. The evening before we arrived with the van large scale violence broke out on the streets which culminated in shootings and many serious injuries requiring hospitalisation. There was also a hit and run incident where a refugee was hospitalised. It was hypothesised that a large number of refugees had arrived in Calais in the previous week or two after rumour spread that the visit of Macron with Theresa May heralded a new opportunity for people to join their families in the UK and that subsequent tensions in horrendous conditions had arisen between racial groups. None of the violence was directed at volunteers or Calaisians.

It is worth remembering at this point that we are in winter, the temperatures are dropping to zero and remaining low for the entire day, and a sustained police campaign to let no one rest was a relentless reality. Refugees are living outside, permanently exposed to the elements with their only warmth and shelter being donated and then torn down or sprayed with pepper spray several times per week. Official numbers estimated on the streets of Calais are around 400 people, at odds with independent organisations estimates of 700-850 people living on the streets, surrounding woodland and industrial areas. Driving around Calais groups of people huddle around warehouse huts and telephone boxes which provide inefficient shelter from the falling snow, a large portion of them minors (under the age of 18).

The large scale violence brought news reporters and refocussed attention on a crisis has been shamefully absent from the press and minds of many, but unfortunately this was predominantly for the wrong reasons. Organisations had difficult decisions to make regarding volunteer safety and continuing to support those who were exceptionally vulnerable and RCK released the following statement:

Recent troubles in Calais have been exasperated by the cruel and inhumane conditions and treatment of refugees. We do not condone any forms of violence, either state or criminal, and it is very sad to see such circumstances unfolding that create unsafe and violent situations for a lot of innocent and vulnerable people.

We work extremely hard every day with distribution logistics so that RCK volunteers are never put at risk and their safety is the first and foremost priority.

We have seen increased amounts of support in Calais the last few days with a lot of kind people bringing donations and wanting to help, this is deeply encouraging when all the groups working here face blame and attack from the media and governments looking to divert their own responsibility. 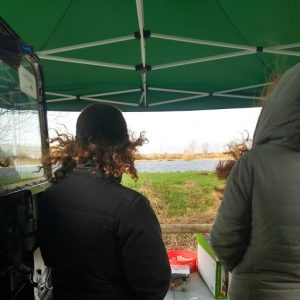 Out with Mobile Refugee Support 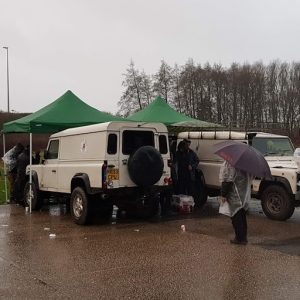 Out with Mobile Refugee Support

As well as working incredibly hard in the kitchen a few of us volunteered to join distribution teams in Dunkirk where we touched the horror of the situation. It was bitterly, bitterly cold. Three of us joined a small organisation Mobile Refugee Support, a small independent group delivering warm drinks, an opportunity to charge and mend mobile phones, emergency warm clothes, and advice. Wrapped up in as many layers as possible we shivered our way through 4 hours serving warm drinks and biscuits in a truly biting wind by a lake in Grande Synthe. Small tents were visible in the woods and countless people came and went, utilising the opportunity to drink warm, sweet tea and, vitally, to charge phones to stay in contact with loved ones. We made a tea at an incredible pace trying to warm the hands of men, women and children and watched in horror as people stood in fires, with the flames licking their legs, in a desperate attempt to be warm. 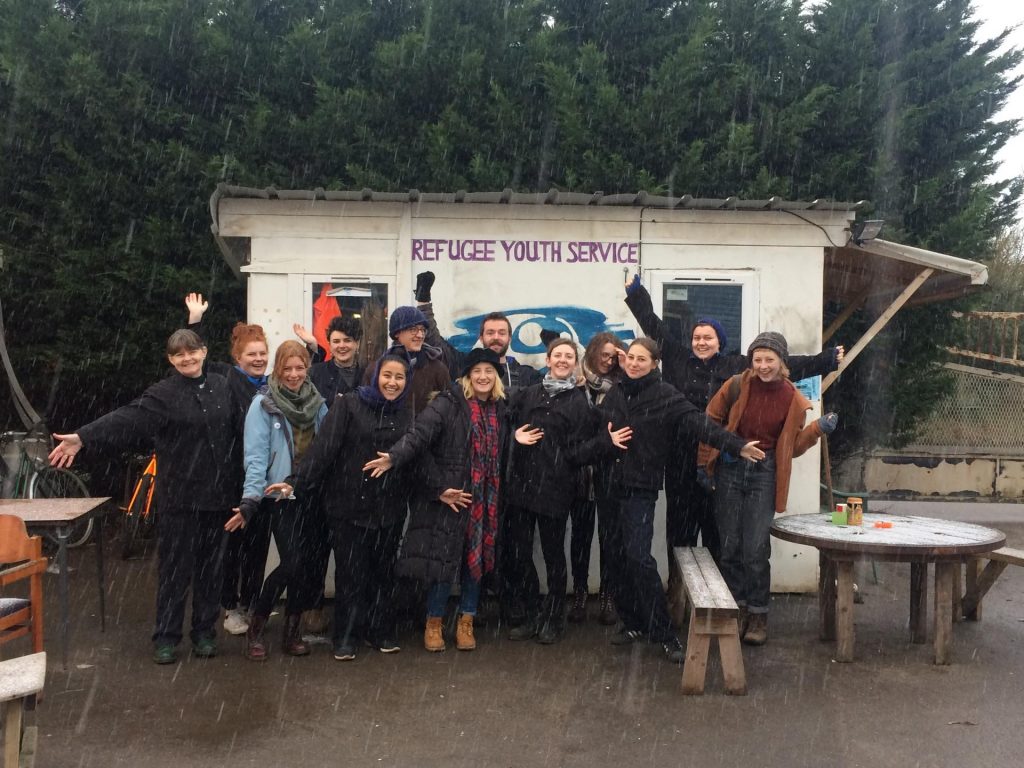 After a weekend of tiring but exhilarating volunteering alongside a diverse group of truly incredible people it was time to head home. For myself that meant reuniting with my young children and holding them tight, thankful that I live in a country where I am not forced to flee and live in truly horrific conditions seeking a safe life for my family. Other members of the group have expressed difficult and conflicting feelings regarding the transition back to a life where we are sheltered and removed from the humanitarian crisis. Many of us will return.

A big, huge thank you to all who so generously donated clothes, sleeping bags, food and money to be taken to Calais. If you would like to know more about the situation or how you can help then please do be in touch. Refugee Community Kitchen are a truly incredible organisation and we witnessed this first hand. They rely almost entirely on donations so please do give generously if you can here: http://refugeecommunitykitchen.com/donate-money/.

With thanks for reading and sharing,

Natalie May
Equality Officer, UNISON at the University of Bath